In her remarkable memoir, The Hour of Land, naturalist and author Terry Tempest Williams writes eloquently on the relevance of national parks marking the centennial of the National Park Service with a prescience that can be extended to all parks. 20 Artists, 20 Parks celebrates the state parks of Iowa that are also celebrating their centennial; Williams reminds us that parks are “portals and thresholds of wonder … breathing spaces for a society that increasingly holds its breath.” Iowa’s beautifully diverse state parks have inspired visitors from around the country ever since Backbone State Park, opened in Delaware County in 1920. A century later, the parks’ natural beauty remains a source of creative inspiration. Organized by the Iowa Arts Council, a division of the Iowa Department of Cultural Affairs; the Iowa Department of Natural Resources; and Iowa State University, the exhibition at the Art Center is the fourth stop on the show’s statewide tour, after visiting Des Moines, Dubuque, and Clarinda. As its title suggests, the installation showcases artwork that 20 Iowa artists created during the summer of 2019 while working in 20 state parks to celebrate the state parks’ centennial anniversary. Selected artists – including students and faculty members from the Colleges of Design, Agriculture and Life Sciences, and Liberal Arts and Sciences at Iowa State University – worked closely with park rangers to learn about each parks’ unique ecosystem. “The artwork is as varied as the parks themselves, from the Maquoketa Caves to Stephens State Forest to Gull Point on Lake Okoboji,” said the Iowa Arts Council’s Veronica O’Hern, “Together the paintings, sculptures, textiles, photos, videos and other art forms capture the sights and sounds of these unique pockets of the Iowa landscape.”

Artist Carol Faber worked in Sioux City’s Stone State Park. An Associate Professor of Graphic Design at Iowa State University, she is interested in evoking” a sense of place through visual textures and surfaces.” Although she integrates both traditional and digital methodologies, she works mainly via digital manipulation as evidenced in Fall Prairie. The artist grew up in northwest Iowa, has a BA in studio arts with an emphasis in ceramic sculpture from Morningside College and both an MA and an MFA from Iowa State University. Faber might agree with Williams that “Wilderness is the source of what we can imagine and what we cannot – the taproot of consciousness.” 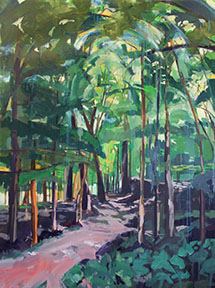