Ben Pratt has been a professional artist for a very short period of time. He finished his undergraduate degree in art from Briar Cliff University in 2011. Still, his paintings have been included in several group exhibitions at the Sioux City Art Center, have been featured in multiple issues of the annual journal, The Briar Cliff Review, and are represented by a major regional gallery. And he has had a full-time job since he graduated.

The precision with which he creates his paintings is connected to both his education and his job. Ben began studying at Western Iowa Tech Community College in 2005, taking general education courses. But he began studying drafting more intensely, eventually received his diploma in industrial drafting. Unlike many other drafting programs, WITCC requires students to take a full year of drafting by hand. He decided to enroll in a painting class, after receiving encouragement from an advisor, who also happened to be the mother of his best friend. He enjoyed the painting class, taught by Mark Kochen, and took a second before completing his studies at WITCC.

While Ben began working part-time as a drafter at Custom Woodworks, he enrolled at Briar Cliff University to pursue a business degree. However, he decided to take an art class with Nan Wilson. After much consideration, he made the switch to art as his major. From Wilson, he learned to think of the surface of his canvases as a skin upon which to layer whatever imagery he wanted to apply. From his other art professor, Jeff Baldus, he learned to limit his paintings to only what was necessary.

Many of his most successful student paintings presented common, recognizable objects that were presented with great accuracy, as might be expected by a trained draftsperson. What especially interested Ben as he created paintings of stoplights and basic house forms was the idea of proper scale. The houses were painted with background details that gave viewers a sense of the house sitting within a landscape. The stoplights, however, were painted in isolation. It was important to Ben that the stoplights in his paintings stay true to the proportions of actual stoplights so that the eyes of viewers would consider only the appearance of the stoplights, their support poles, and the space around them.

Ben’s choices of subjects, and his use of clean, clearly defined shapes, can make his paintings appear similar to the work of Pop artists such as Roy Lichtenstein and Tom Wesselmann. In this way, we can recognize his work as pictures; they are of something. However, his decisions have less to do with referencing either pop culture or art history than they do with personal preferences. His series on popsicles and Made in China stickers, as examples, began as Ben thought about childhood experiences. So, in a manner similar to that of Andy Warhol, he has selected subjects based to a large degree on how ubiquitous they are in his experience, along with how uniform in appearance they can be.

Ben Pratt Popsicle 10 2014There is also something related to the work of Pop artists in the process Ben uses to create his paintings. Pop artists were fascinated not only by the products of commercial industries, but also the production methods. Working in AutoCAD, a commercial drafting software application, Ben experiments with and finalizes his compositions on his computer before ever picking up a paintbrush. He focuses more on the bare necessities of redesigning an object rather than trying to remain faithful to a realistic image of it. Because his paintings go through an arduous process of design, followed by the taxing process of handpainting each stroke, by the time Ben has finished a painting, any personal attachment he had to the subject of his painting is replaced by satisfaction with the painting as a painting.

While Ben’s straightforward composition of common and recognizable images gives him a connection to Pop art, his restrained use of color and his commitment to keeping his paintings as clean and clear as possible bring him close to two additional artists connected to the 1960s. He admires Ad Reinhardt and Robert Ryman, artists whose carefully crafted paintings connected the fluidity of Abstract Expressionism with the purity of Minimalism. Both of these artists have worked primarily on square surfaces. Reinhardt became best known for a long series of paintings devoted to the color black. Ryman has spent more than 50 years creating paintings devoted to the color white. Each artist explored the different ways in which these most humble colors could challenge our thinking and astonish our eyes.

Ben is largely uninterested in non-representational painting, but he is able to filter his interest in painting objects through the inspiration of Reinhardt’s and Ryman’s simplified compositions. More often than not he either places his primary image in the center of a square canvas or balances several images around the center. This simple arrangement, along with his meticulous painting style, can make it easy to believe we are looking at nothing more than a painted version of a familiar object. A book, a target, a Windows 95 cursor, a view through binoculars—his subjects commonly revolve around ideas of vision and precision.

Even when his paintings are not connected to these ideas, such as his Made in China stickers and popsicles, they ask us to think about our own vision and the value we place on precision. These are paintings without a political message or a radical artistic concept behind them. They are about the basic components of art—line, color, and shape—that happen to have been arranged in a way that makes us think we see something more. Right after we make the identification of what that something more is, Ben asks us to set that aside and keep looking. 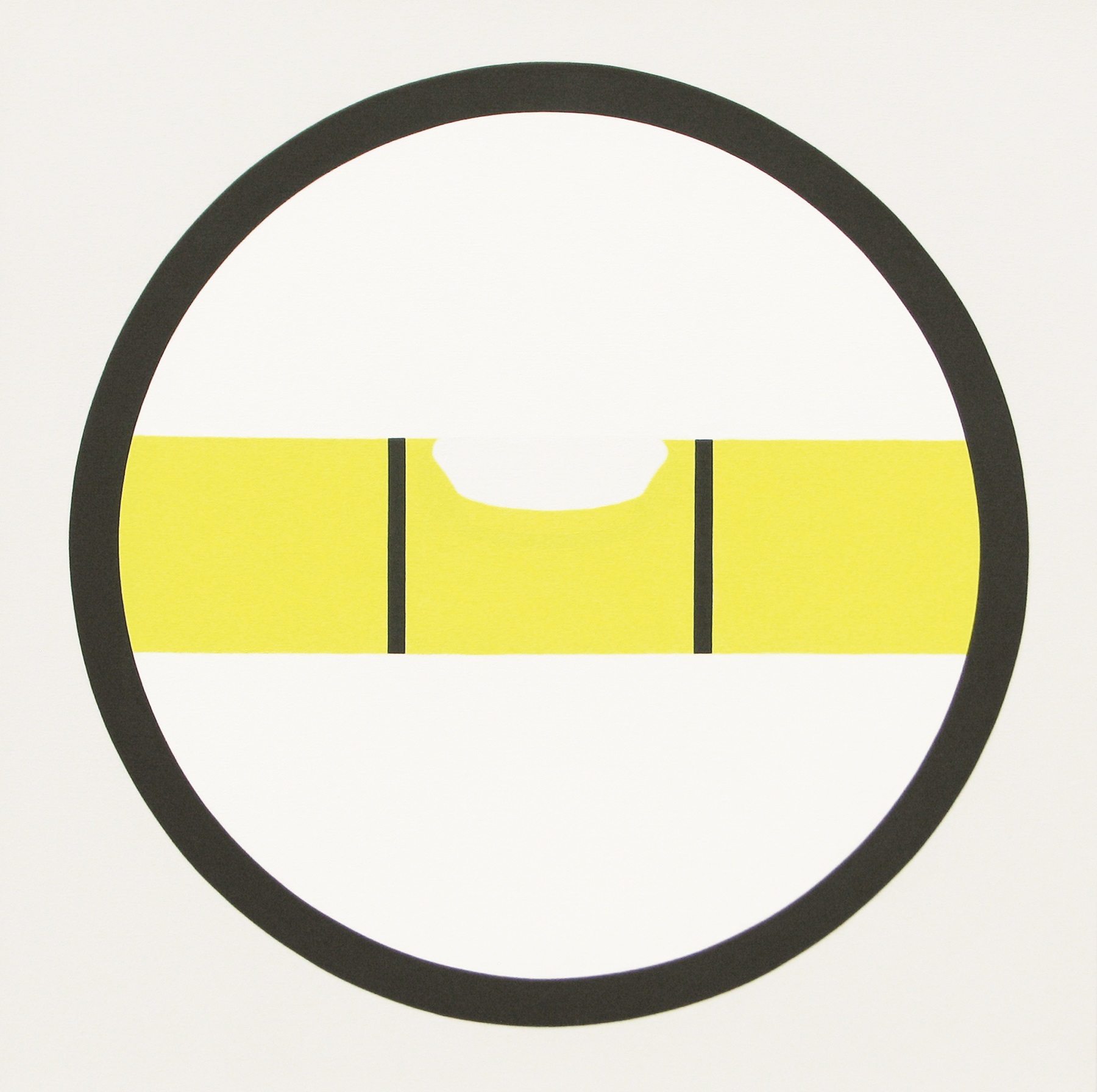 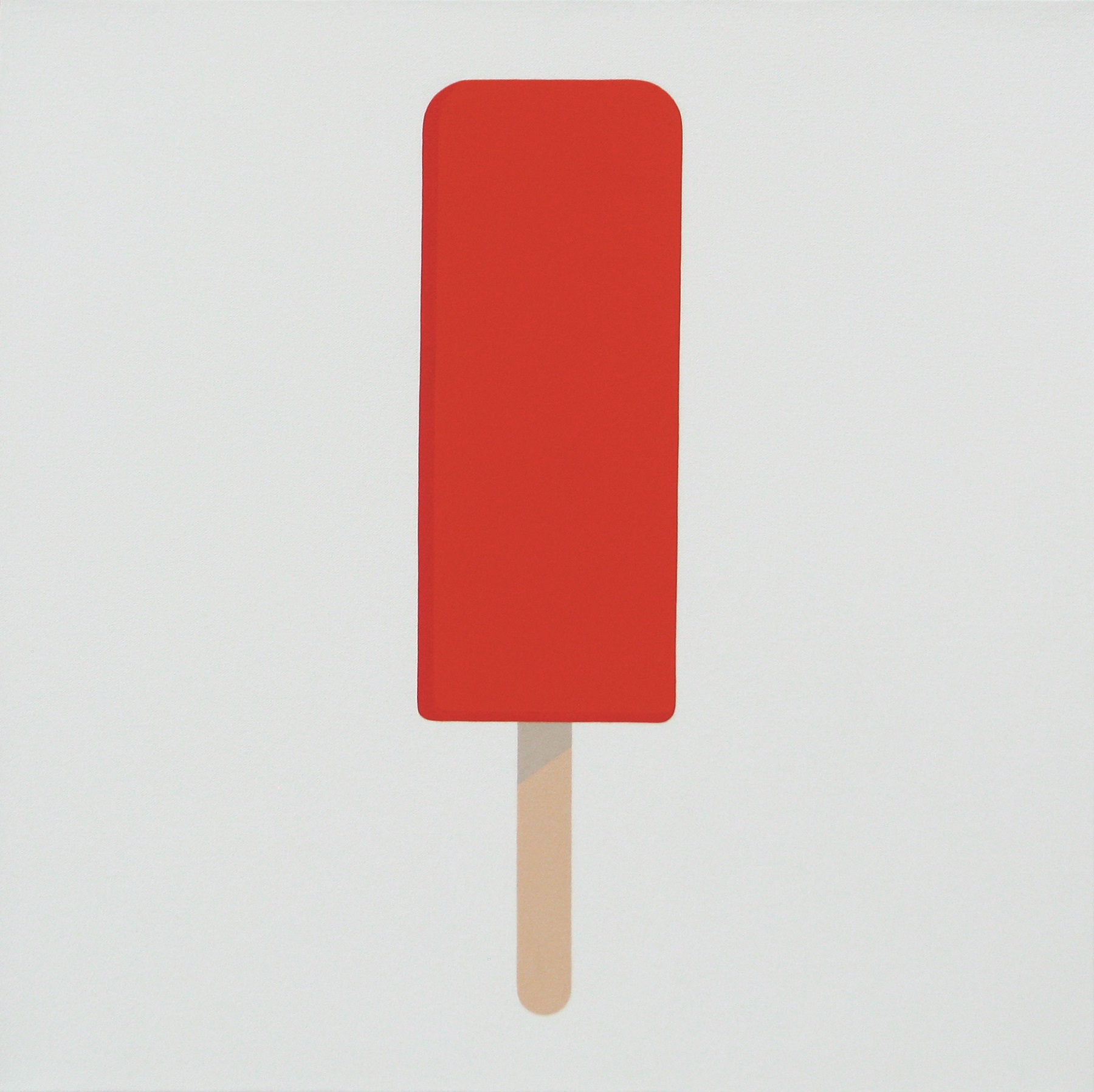