More photographs are being taken today than at any time in the past. Perhaps more important is that most of us are exposed to more photographs than ever before. The reasons for this are numerous, with technological shifts being at the top. When we “post” photographs, we do so almost entirely as statements about ourselves: what and whom we like, where we are, what we are doing. Those images are attached to an account that identifies that image as having a strong connection to the account’s owner.

Prior to the digital world, however, a photographic image did not exist as a file, but as a print, slide, or negative. It was a tangible thing. As tangible things, photographs often became displaced if not stored carefully in an album, slide box, etc. Even then, once pulled away from its original photographer or owner, a photograph or album of photographs could take on a life of its own, or perhaps lose all of its identity.

Sioux City artist Jodi Whitlock has been fascinated with art and photographs for many years. She took many art classes during high school. And shortly after leaving high school, she purchased a film camera and set up a darkroom to develop her own film, even as she moved throughout the country.

After several years away, Jodi decided to move back to Sioux City and enroll at Briar Cliff University (BCU). Though her first intent was to focus on pre-med studies, it didn’t take long for her to shift her major to art, the subject that had most interested her for many years. While BCU had established a great reputation for developing the skills of art students who worked in an abstract style, Jodi remained committed to making art about people. As a student, she began working from photographic portraits, finding within them beautifully expressive and bold lines.

The attraction to lines was always something that was part of Jodi’s art. She noticed at a young age that she can discern figures in the overlapping lines formed by tree branches, just as others might see pictures in the shapes and tones of clouds.

Photographs took on an even more important role in Jodi’s work as she earned her master of fine arts degree at the University of South Dakota. She acquired a collection of old mug shots from a flea market. As photographs taken out of their original context, they were ripe for reinterpretation. Jodi converted them into mixed media artworks that touched on ideas regarding memory and identity.

Jodi Whitlock Untitled 2014A few years ago, Jodi found a second stash of photographs in a downtown antique store. Far from mug shots, these photographs featured glamour portraits of young women. Rather than add marks to the photographic images, Jodi decided to recreate the lines she saw in their faces, hair, clothing, and jewelry. She could have simply drawn her version of the portraits in a straightforward manner. Instead, she created blind contour drawings of them. These blind contour drawings are exactly what they sound like: Jodi’s hand, holding a Sharpie, would trace the lines that she saw as her eyes moved across the image. She kept her eyes focused on the photograph, not looking at all at the drawing she was making.

Creating blind contour drawings is a fundamental lesson for every art student. As a student, and as an instructor at the Sioux City Art Center, Wayne State College, and Morningside College, Jodi had made many of these drawings prior to this project. Blind contour drawing helps artists in a variety of ways: it helps the artists focus their eyes on only those portions of the subject that are defined by lines; it connects what the artists’ eyes are perceiving to a direct response by the artists’ hands; and, it helps the artists relax their arms and hands to avoid creating rigid drawings.

For Jodi, the purpose of using the blind contour drawing technique goes further than this. Just as she is able to see images of people within the intertwining branches of trees, blind contour drawing allows her to work in the reverse of this process. At times, she uses the word Canotila, a tree spirit in Sioux folklore, to refer to this perception that something spiritual exists in the trees. By distilling photographic images into a single, continuous line, channeling the information from eye to brain to hand simultaneously, Jodi feels more deeply connected to each of these otherwise unknown subjects.

Her most recent works involve a new photo album that she discovered. In this case, most of the photos contain multiple people in what appears to be a collection of images from an unidentified single family. Unlike the mug shots or glamour shots, these photographs are neither close-ups nor poses assigned by a purpose-driven photographer. They are intimate and emotional, even with the anonymity of the subjects. The characteristics make Jodi’s current works the most demanding yet. She has been experimenting with new ways of drawing the line, moving away from Sharpies to pencils, which are then followed by squeeze bottles or syringes of paint.

Jodi keeps her color selections to a minimum. By using broad planes of acrylic paint, she accentuates the flatness of the image that is created by the blind contour drawing. Her use of only a few different colors per painting also keeps our attention focused on the drawing itself. After having created dozens of works in her blind contour drawing series, Jodi has a clearer sense of which colors work best. Increasingly, she has reduced color down to either one or no background colors so that the line exists in isolation.

The contour paintings of Jodi Whitlock are, above all, surprising. Sometimes the paintings are startling, even frightening; in other cases, they are downright funny. Our eyes work hard to recognize portraits of people we have never known or seen. Jodi’s second-generation portraits show us the futility of trying to know someone through photographs. What we see is subjective, even in a world in which photographs have never been more widely used to shape and control image. Each individual’s physical image is, after all, nothing more than lines, shapes, and colors. 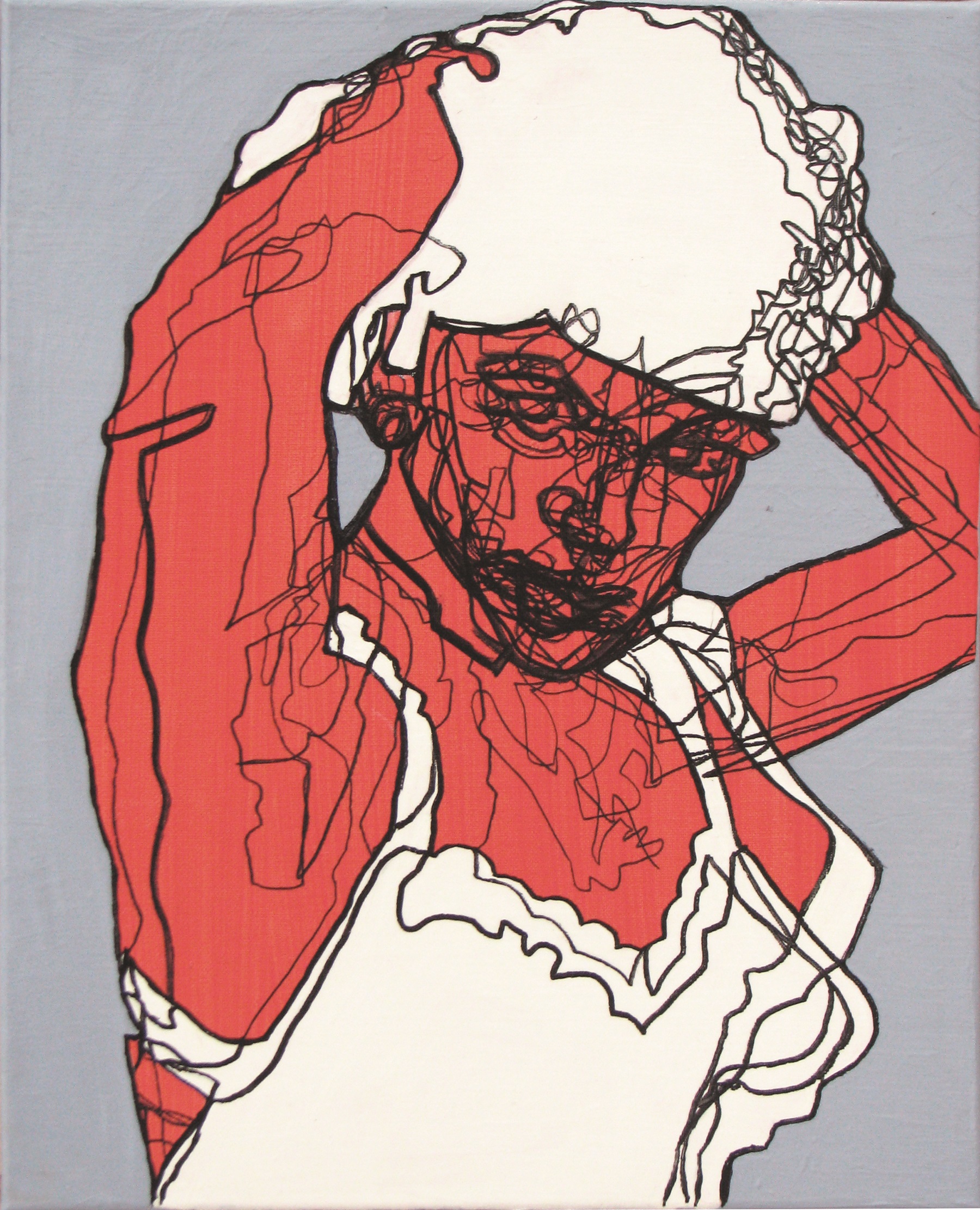 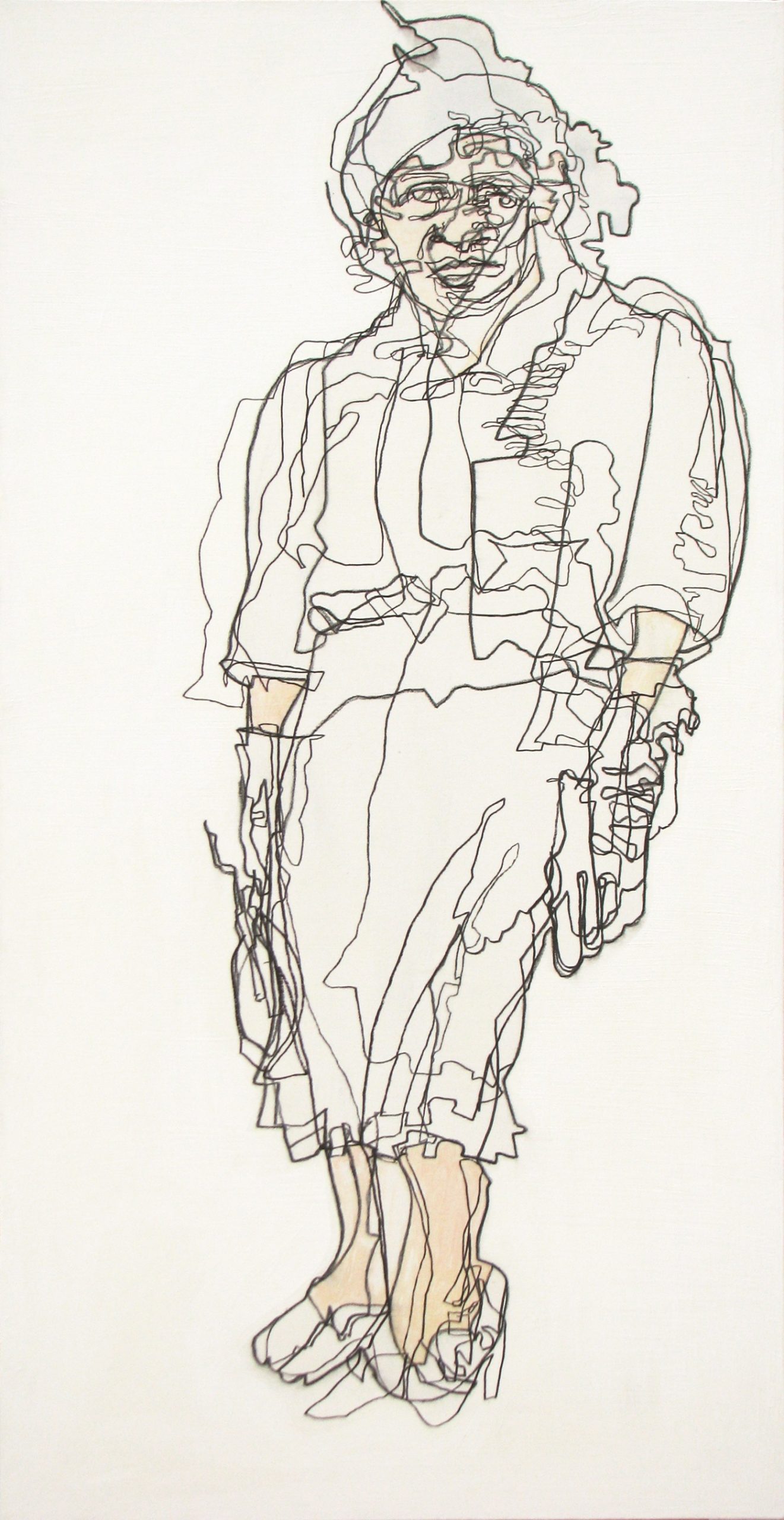