From the Store Window to the Gallery: The Legacy of T. S. Martin


This exhibition honored the legacy of T. S. Martin, the visionary founder of Sioux City’s trendsetting department store, T. S. Martin Company. This legacy includes everything from the dynamic growth of Sioux City in the first several decades of the 20th century to the construction of the beautiful building that has been home to the Sioux City Art Center since 1997. While T. S. and his sons brought vitality, uncompromising quality, and elegance to downtown Sioux City, the granddaughter of T. S. Martin, Margaret Ann Martin Everist, became the leading force behind the development of the Sioux City Art Center in the late 20th century.

This project included many layers of history and art, presented through a two-part exhibition, didactic panels and photographs, an exhibition brochure, a book containing for essays that, together, detailed the fascinating interplay between commerce, fashion, theater, local history, and, of course, art. Part one of the exhibition brought together six local design firms, which designed imaginary store windows—the form of display that T. S. Martin’s store used so beautifully and effectively to highlight its offerings. As their focus, the design firms selected an artwork from the Art Center’s permanent collection. The artworks from which they made their selections were not random: the firms chose their artworks from the dozens in the Art Center’s collection that had been donated over the years by Margaret Ann Martin Everist, her husband Hubert, and her children. 6 South Designs, M+ Architects, Miller Bros. Furniture, Mod House Interiors, Spaces Interior Design, and Studio 427 worked with great energy and dedication to showcase these artworks in unique, creative settings. In addition, the Art Center produced a brochure that documented these window displays, accompanied by the design statements written by each company that explained their inspirations and decisions.

Within Part One of the exhibition, the Art Center presented a number of didactic panels that emphasized the overwhelming influence of T. S. Martin’s store, which was located just one block from the Art Center’s campus. Particular emphases were made on the visual impact of a visit to the store, the designs of the store’s window displays, and the concurrent support of the Martin family for the new Sioux City Society of Fine Arts (which would become the Art Center Association of Sioux City, the Art Center’s private fundraising and support organization), The exhibition was also augmented by historic photographs of the Martin store, thanks to the archives at the Sioux City Public Museum, which presented its own exhibition of artifacts and historic fashion related to the great turn-of-the-20th-century department stores in Sioux City.

Part Two of the exhibition presented an additional 28 artworks donated by Margaret Ann Martin Everist and her family. These works represented just a sample of the more than 80 artworks gifted by the Martin family. The artworks in this exhibition are fundamental to the Art Center’s mission of presenting and collecting outstanding works by the artists of Sioux City and the upper Midwest.

Lastly, the Art Center worked with scholars across Iowa to produce a substantial book on the legacy of T. S. Martin. The essays in The Legacy of T. S. Martin introduced T. S. Martin and his store to a 21st-century audience. Thomas Morain introduces T. S. Martin to readers in his essay, “Martin’s Department Store: Knowing the Territory.” Morain traces Martin’s industrious and ambitious career path that began with him as a traveling salesman and culminated as the wealthy owner of a spectacular department store. Richard L. Poole’s essay, “How Theatre Influenced Downtown Department Stores,” traces the links between the growth of live theater in Sioux City and the prosperity of department stores. Poole discovers a number of ways in which theater and the stores benefitted each other. In her essay “The Role of the Department Store in Early Twentieth Century American Life,” Sara B. Marcketti discusses the role of department stores in expanding the roles of women as consumers and in accelerating the evolution of fashion. The place where middle-class women gained access to the latest fashion was the department store. Thus began the desire to wear only the latest fashion; the growth of department stores marked the beginning of the time when, as Marcketti comments, “a woman would almost rather be ‘caught dead’ than wear last year’s style or gaze on another woman wearing the same dress.” In Todd Behrens’s essay, “Stockrooms, Showrooms, and Galleries: The Growth of Visual Culture in Sioux City,” he discusses the importance of T. S. Martin Company in which the origins and success of the Sioux City Society of Fine Arts are linked to the growth of the department stores in Sioux City. He states that a trip to Martin’s store “required the visitor to have cultivated a clear sense of taste.” Behrens concludes by declaring, “The Sioux City Art Center exists in large part through the Martin family’s century-long commitment to improving Sioux City’s taste for style and art.” 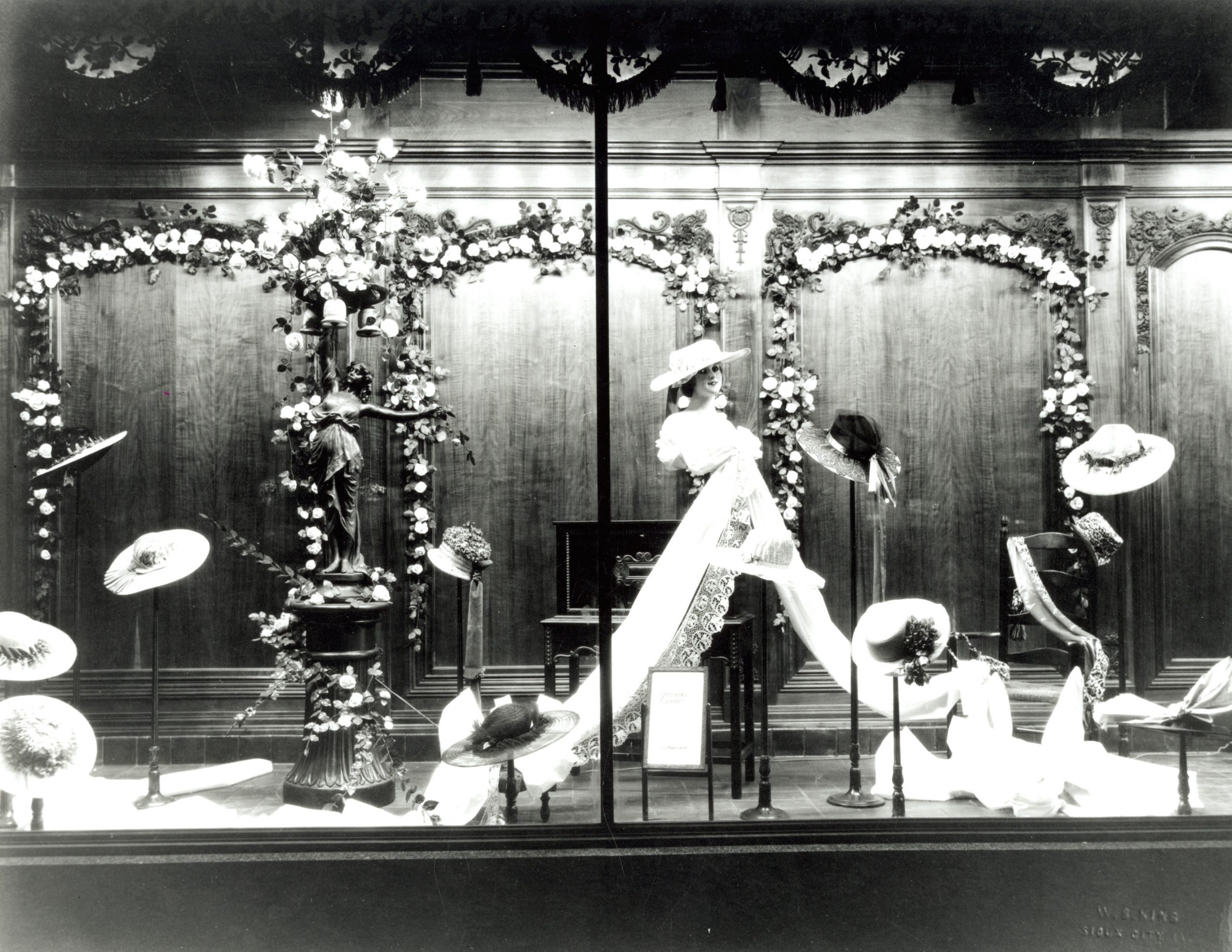