For the first time since 1992, Grant Wood’s Corn Room mural is shown in its entirety. An exhibition gallery was created in the summer of 2007 in the third-floor H. H. Everist Gallery for long-term display of the mural, while at the same time allowing the remaining Jensen and Terra galleries to be used for changing exhibitions. The special installation of the Grant Wood mural was funded by a donation from Bill Turner.

The Corn Room mural was one of four murals commissioned by Omaha businessman Eugene Eppley for his hotels in Council Bluffs, Cedar Rapids, Waterloo, and Sioux City. Originally part of the historical Martin Hotel, the Corn Room was created by Grant Wood in 1926, then lost for decades under paint and old wallpaper, only to be rediscovered in 1979.

The mural was initially donated to the Art Center in 1986 by Tower Properties, Ltd., but when the corporation went into bankruptcy in 1989, the courts made the donation invalid and ordered it to be sold at auction. In 1995, this auction was held at the Sioux City Art Center, and the mural was purchased by Sioux City attorney Alan Fredregill for $80,000. He spent the next year looking for a permanent home for the Corn Room, ultimately donating it to the Art Center where it was accessioned into the permanent collection.

Corn Room is a significant transitional work for Wood’s development. His conception of Regionalism, the only Modernist art movement to come out of the Midwest, emerges in this mural. We can see his embrace of the local subjects and native landscape familiar from Wood’s mature, Regionalist works of the 1930s, but the mural is executed in an earlier, painterly technique where he created his imagery by removing paint from the prepared canvas. This subtractive technique resulted in severe damage to the canvas when it was covered in the 1950s. The conservation process saved the mural, but the resulting damage has dimmed the imagery and shifted his colors towards the golden-brown visible today.

The mural, when seen in the context of the other works in the exhibition by Wood, provides visitors with the opportunity to see how Wood matured as an artist, developing the style that brought him national an d international recognition.

Grant Wood (1891–1942) is the only artist born in Iowa with an international reputation. His best-known painting,American Gothic (1930), has become an iconic image of rural America. Wood spent the majority of his art career living and working in Cedar Rapids. He was the head of the Iowa section of the Public Works of Art Project which ran from 1933-1934.

The Corn Room mural is a typical example of the kinds of landscape visible in the surrounding countryside, and its genesis—as one of four murals commissioned by a local businessman, Eugene Eppley, for hotels in Council Bluffs, Cedar Rapids, Waterloo, and Sioux City—describes the types of relationship between artist and audience Wood hoped Regionalism would foster everywhere in America. This close connection between artist, community, and locale was an essential part of the broader agenda of Regionalism.

Wood was the most prominent artist in the Regionalist art movement in the 1930s, and he remained a proponent of its approach to art for the remainder of his career. This movement was a democratic art accessible to everyone and reflecting local, rather than imported from Europe or elsewhere, interests and traditions. The ideas Regionalism describe are connected to the immediate, local audience for the art.

The technique used to paint this mural was subtractive—Wood’s assistant Carl Eybers would put a thin layer of paint on a prepared section of the canvas, and Wood would then wipe away from that paint to create the corn stalks, buildings and other imagery visible. The mural is faded today both because of this subtractive technique and because it was painted over. The lengthy conservation process to remove the paint and wallpaper that covered up Wood’s painting could not restore it to its original brightness.

This mural was painted around 1926 and is an important early example of Wood’s emerging Regionalist approach. It is one of his first works to be drawn specifically from local concerns, and it prefigures his shift towards a more highly detailed realism following his 1928 trip to Munich, Germany, to supervise the manufacture of the Memorial Window for the Cedar Rapids Veterans Memorial Building.

The Corn Room clearly shows Wood was developing the ideas and approaches that would become Regionalism several years before he produced his first clearly-Regionalist works and achieved critical success with his invention: Woman with Plants (1929) and American Gothic (1930). Both these paintings have their origins in the specific landscape of the Midwest, but fuse their local subjects with formal concerns drawn from seventeenth-century Dutch painting. Wood’s concerns with landscape, visible in the Corn Room mural, remain a constant reference point for his Regionalist works: it appears as the background to Woman with Plants and in the famous house seen behind the couple in American Gothic. The central imagery in one of the main panels—conical piles of harvested corn—reappears in his later work, notably as the central focus of his lithograph, January (1937), in the painting Iowa Cornfield (1941), and in his last known work, an oil sketch from 1941 called Iowa Landscape.

This mural was papered over in the early 1950s and forgotten until it was rediscovered in 1979 by Leah Hartman, an interviewer for the Siouxland Oral History Program. Her interview with Carl Eybers, Wood’s assistant in painting the Martin Hotel mural, led to its being removed from the Hotel and conserved by the Sioux City Art Center. Tower Properties Ltd., the owners of the Martin Hotel donated the mural to the art center in the 1980s after its recovery, but when they filed for bankruptcy in 1989, the future of the mural in Sioux City was uncertain. Alan Fredregill purchased the mural at the auction and donated it to the Art Center so it would remain in Sioux City. 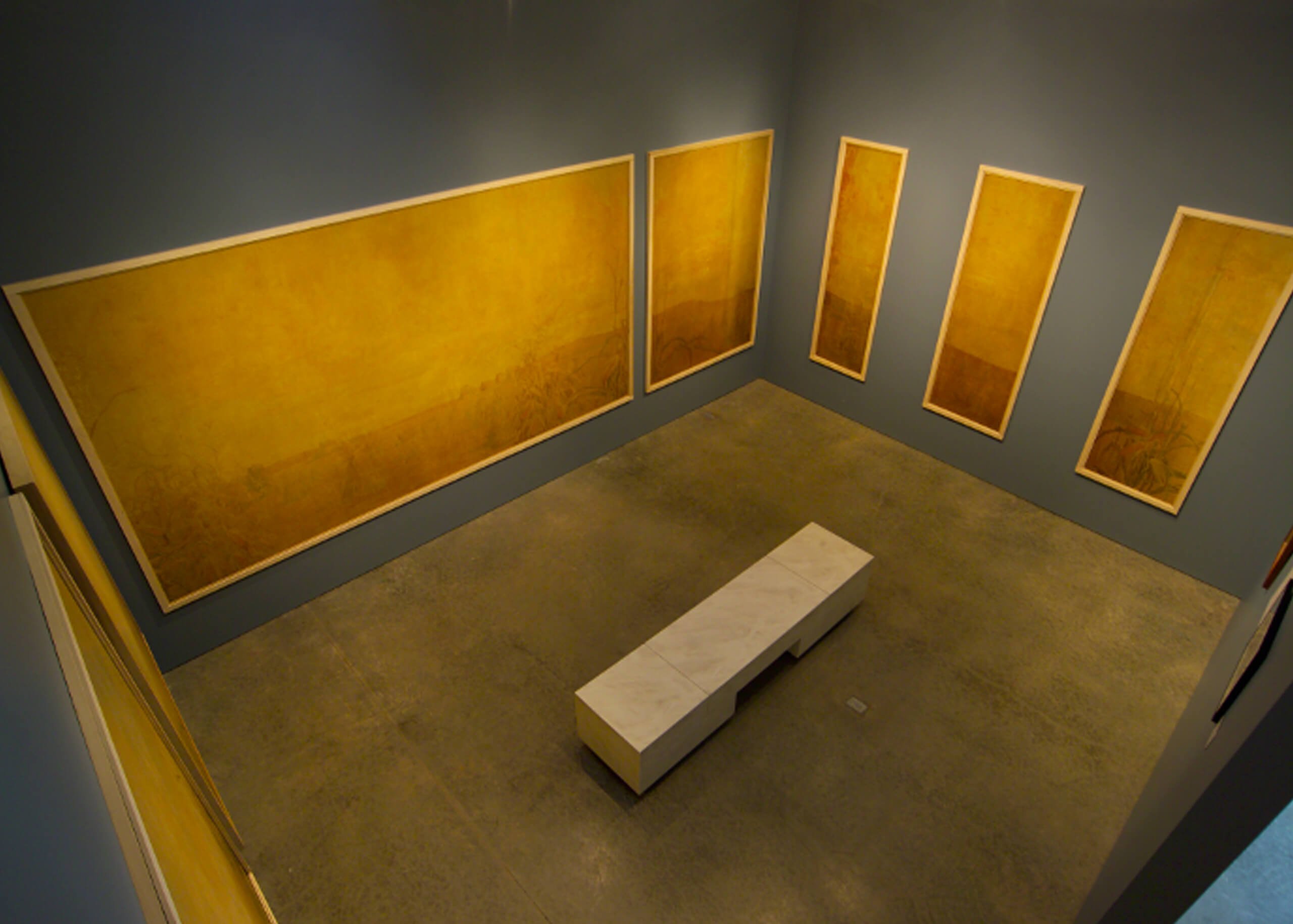