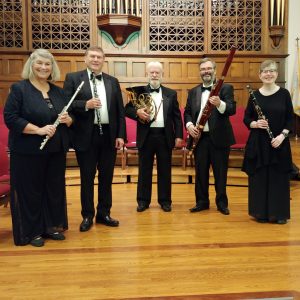 Quintessential Winds is a quintet made up of members:  Glenda Drennen, Lynn Gross, Doctors Deborah Check-Reeves and Gary Reeves, and Rick Lacy.

Glenda Drennen, Flute, earned. BFA degree in Music Education at the University Of South Dakota, Vermillion,  and played with the Sioux City Symphony during her years in college.  She plays in area municipal bands and ensembles.  She taught public school music for a number of years and is now a visual artist.

Dr. Deborah Check-Reeves Clarinet, is Curator of Education and Woodwind Instruments at the National Music Museum at the University of South Dakota, Vermillion.  She also plays Bass Clarinet in the Souix City Symphony Orchestra.

Rick Lacy, Bassoon, is Contra Bassoonist with the Sioux City Symphony Orchestra.  He is a member of the Sioux City and LeMars Municipal Bands and the Not Yet Famous Bassoon Band.  Rick has a Bachelor's degree in Mathematics and Science from Morningside College and works as a software developer.

Could not find route!

Weather data is currently not available for this location